The 11th prompt of Inktober is Eagle. I decided to explore the isometric projection, a common projection pattern. 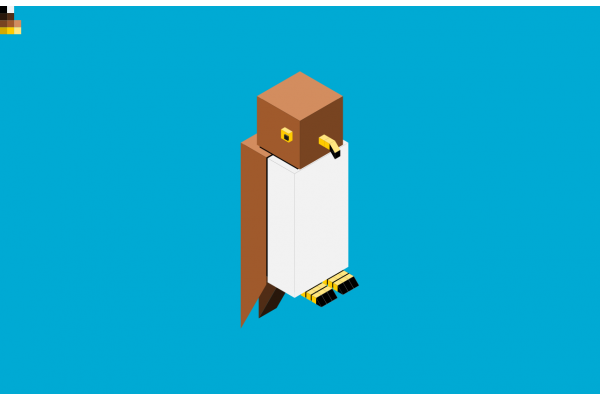 Any projection consists of projecting a 3D shape onto a plane. Among projection methods are

Isometric projection is an orthographic projection in which the 3 axes appear to have the same length. Two axes are separated by an angle of 120°. This particular projection is very often seen in video games and pixel art.

While being an interesting exercise in and of itself, I was also inspired by the French board game Cubirds by Catch Up Games, in which birds are drawn with parts of cubes.

Isometric projection drawings will surely start in much the same way: draw a hexagon. A cube viewed in isometric projection will have the silhouette of a regular hexagon. In Inkscape, the Polygon and Stars tool (*) allows to simply draw regular polygons. Be sure to select polygons (and not stars) from the top menu and choose 6 sides. Pressing Ctrl while drawing the hexagon will allow a precise control of its orientation. For the classic isometric projection, you want two sides of the hexagon to be vertical.

Once you have a hexagon the right size for your drawing, you can make the three visible faces of a cube by just:

Bringing the three faces together gives you a cube pattern, which you can then use to build other solids, by duplication and addition / subtraction / intersection.

As an example, here are the basic shapes I used in my drawing: 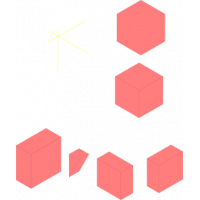 Once the basic blocks are drawn the assembly game depends on what you want to achieve. In my case, I drew a 'skeleton' on which I added details one after the other.