Meet Empty Dumpty, the apathetic alter ego of Humpty Dumpty. It likes nothing, nor does it dislike things. He simply stares. 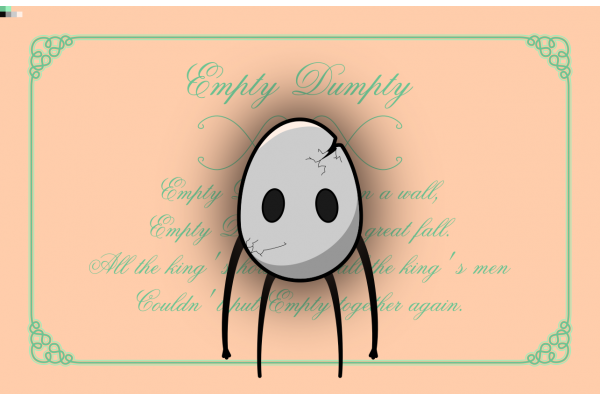 When I read the 14th prompt, empty, my thoughts went very quickly to the lore of Hollow Knight, the video game by Team Cherry. I imagined drawing some kind of broken egg in a very dark setting.

Playing around with the word empty, I also came up with Empty Dumpty, and my plan was settled: Empty Dumpty would be an anthropomorphic egg , with a very blank stare and flabby arms.

I first drew the character taking inspiration from Hollow Knight's characters, and then imagined a way to make this character contrast with its background. I placed it in front a very fresh and joyful display of the lyrics of Humpty Dumpty, creating a discrepancy. I can only think of the song as if being played by a battered, out-of-tune music box with some sort of invading white noise when I look at this image...

It is a very simple drawing to make. Here are the most important steps:

The font I used for this card is called Old Script.

To draw an intertwined motif as on the card border, here's how I proceed:

Once you have one corner, just duplicate and flip it to place it at the other corners. You can then draw straight lines linking the four motifs, select every path and combine them (Ctrl+K) in one single path.

To draw the light green outline I used a simple trick: