Today I had a first go at using Path Effects, a door opened to a whole new set of tools! 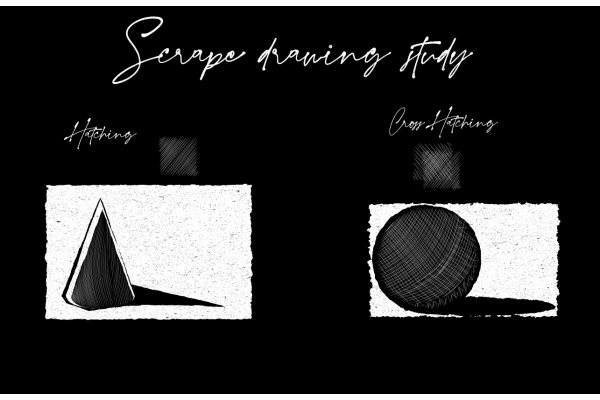 The prompt, Scrape, really made me think of this scratch art where you have a black sheet of paper chich you can scratch to reveal white in selected places, and draw that way.

I thought of how I could do such a thing, watched a few tutorials about related drawings, like using hatching to achieve a sketch-like look, and all this made me want to really try this drawing as a study case, in which I would try out a new medium. So I decided to draw a typical first study, with simple spheres and cones in the light.

Path Effects are as much a source of new ideas of using Inkscape as Extensions can be. They are accessible by Path -> Path Effects, or with Ctrl+&. When summoned, the Path Effect menu appears and you can click the + button to choose from a list of effects.

One of the effects I used is called Roughen. It allows to giggle the border of a shape, and to make its border less regular. I used it on every flat shape on the drawing: white rectangles and black triangles and ellipses.

The parameters are very self-explanatory and allow to control the roughness of the border, just play around to see what's working.

More parameters are offered than for Roughen, and I found them less explicit. Here's the parameters I used the most.

As I didn't want to have flat solid shapes, I wanted a way to make the white rectangles contain random black specks. I did not find a way to make this from a Path Effect, so I resorted to using a texture image.

Those are simply black and white images which depict a texture. Import it in Inkscape, select the image along with the objects you want to texture and select Object -> Mask -> Set Mask. Wherever the texture was black, your object will be transparent, giving it the desired textured look.

Another way to go would be to have a vector texture and subtract it from objects.

The handwritten font is Southam demo. The texture image I used is Texture10 from this set.