Today's prompt is flame, which inspired me to toy with Inkscape's gradients. I wanted to have some shapes appear partially in the light of a candle, on a pitch black background. 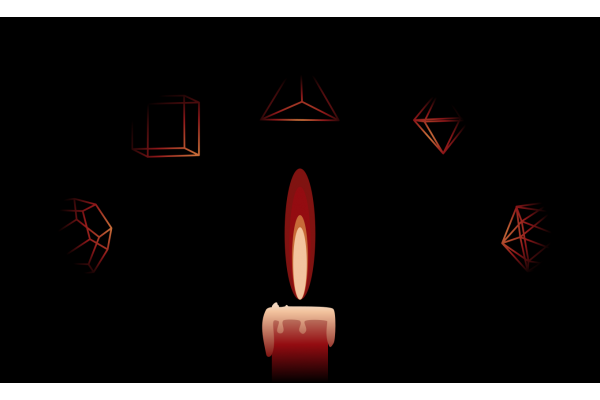 I had never tried to use Inkscape's gradients before, but I figured it could be a way to have an object partially appear in the shadows. I needed to decide which objects I would display.

Although a floating flame was possible, I liked the idea of having a candle stick beneath the flame, and felt it would ground the scene a bit more. As for the lit objects, I wanted to have something simple enough that they could be recognized even though only half of it would show, but still give a mysterious vibe.

I settled for the five platonic solids, in reference to so many theories of them being elemental... I feel like they are quite mainstream but still retain that esoteric feel. Another nice aspects was that they are very hollow, and I wanted to play with light going through shapes.

So I decided to use models, but as I wanted to have quite precise angles on those perspective, I needed a 3D implementation of those shapes to find the good point of views. I used this GeoGebra model, but there are plenty more! It was then as simple as drawing lines on top of my model, and join them all in a path (Maj+Ctrl+C).

I am not very good at coming up with color palettes, so I have developed other skills to put some up! A tool I like to use are palette extractors. The idea is simple: take an image and (somehow) extract the dominant colors from it.

For example, the online tool Color palette extractor does just that. Inkscape, in a way can do it too. The Extensions -> Raster Graphics -> Median tool will reduce the number of colors in an image, and it's then simple to pick the dominant colors with the Color picker (D). Careful, the Median tool takes a numerical argument from 0 to 100, and picking high values will take a toll on your CPU. I found 15 is a decent value.

I recently had seen some nice minimalist posters and picked up a red palette from the left poster.

Using the Background / border panel (Maj+Ctrl+F) on an object, just select a form of gradient for the object (just below the tabs). There are several options to tweak:

For the candle, because it is very close to the flame , I used linear gradients, from almost white on the molten wax to pitch black on the end of the stick. For the solids, I used a radial gradient that would mimic a halo effect, with three stops: the same orange as in the flame, the outer red of the flame and black.

The svg file is available here.

Again there are some drafts around the page.