Of the many reasons why I'm trying out Inktober this month the two main are that I unexpectedly have free time right now, and that I want to progress in designing with Inkscape. Today, I wanted to try out a more conventional design, following again some ideas of flat design. 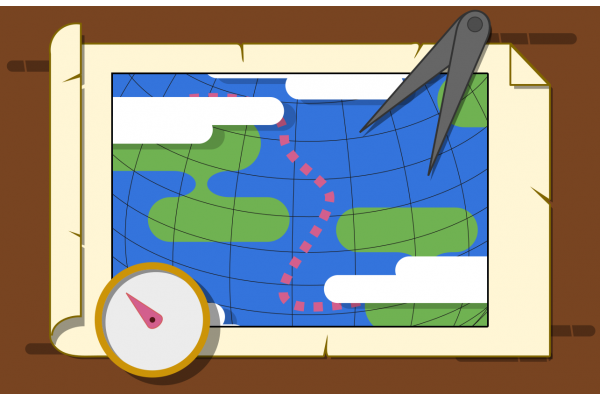 Once I settled on drawing a map, I wanted to recreate the way Kurzgesagt draws continents and clouds, as very simple solid shapes.

I also watched some tutorials, including the excellent Intermediate/Advanced tutorials by Logos By Nick. And I applied some of the techniques he presents there.

Additionally to providing a nice way to organize and lock already drawn shapes, layers are a good way to use clipping. For example, The continents, the grid and the clouds are all overflowing from the map. But I defined a layer that contains a rectangle the same size as the map above these elements. And selecting this top layer along with all layers I wanted to clip, I just had to select Object -> Clip -> Set and voilà!

Shadows, map ripping, wood texture: one trick to rule them all

Logos By Nick's tutorial series is filled with ideas to cut and assemble path in bigger, more defined objects. He heavily uses duplication (Ctrl+D) and various operations on path:

Definitely have a look for yourself!

As an example, here is how I drew the compass:

The compass arrow is simply a Bezier curve. Easy right?

The svg file is here