Inktober's 12th prompt was on the abstract side: forget. 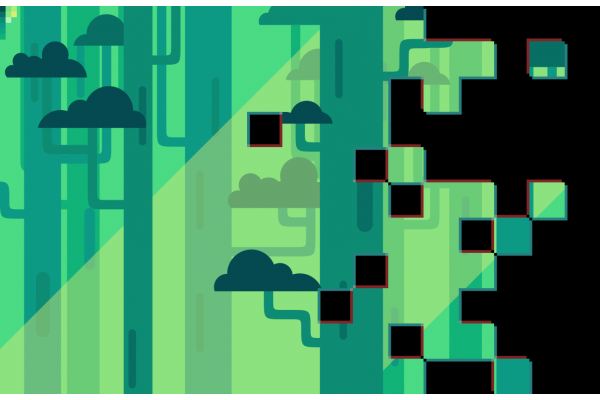 It took some time for the idea of a disintegrating image to emerge. I wanted to depict a memory lost as some sort of data erasure. It felt natural that there would be a pitch black background behind the image, and I wanted to add some glitchy effect with red and cyan light that would create a buggy LCD screen effect.

With this in mind, I knew I wanted the disintegrating image to be rather peaceful, to provide contrast with its destruction. And because I wanted the cyan and red effects to be visible, I wanted contrasting colors in the image. That left yellows, greens and browns for candidates, and the image of a forest imposed itself.

After looking around for representations of forests in vector drawing (and flat aesthetic) I found two pictures that I based my drawing on, the second one I shamelessly derived my palette from.

As is always the case now, I started by drawing my base patterns, that I would assemble to create some trees. The trunk is simply a rectangle.

For the branches I used the Bezier tool (B) to draw a smooth right angle turn, on which I then added handles that would allow me to grown branches vertically or horizontally.

For the foliage, I drew some bundles of circles which I added together (Ctrl++), and then used a rectangle to make a clean cut on the lower side (Ctrl+-).

The marks on the trunks are just a straight line with a large contour and rounded ends. 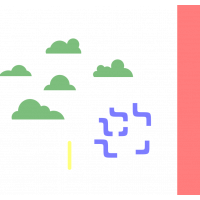 Having the basic building blocks, I constructed some trees, layer by layer. I just placed a trunk and some branches, added that all (Ctrl++), put some foliage at the end of branches, and some marks on the trunk and bundled it in a group (Ctrl+G).

Once all trees were drawn, I drew a large parallelogram with yellow fill and transparency which I placed on top of some trees and under some others to give the impression of a ray of light falling amidst the trees. For the fun and giggles here's the 'unforgotten' image of the forest: 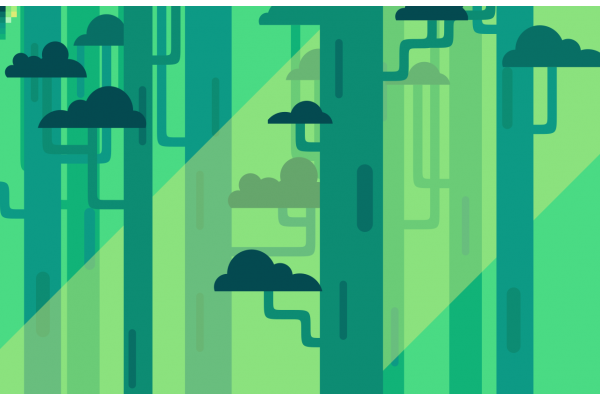 Then I duplicated the layer twice and placed the copies under the image. The white clipping mask I colored red on one layer, and cyan on the other, and gave both those shapes a small translation. That way, If I only view the white mask with the red and cyan layers, it gives the impression of a glitching shape.

Last step was to simply select the white mask layer and the image and to set a clip (Object -> Clip -> Set).