The 8th prompt is match. I went full geometrical to explore some of Inkscape's precision techniques that help achieve nicely put together shapes. 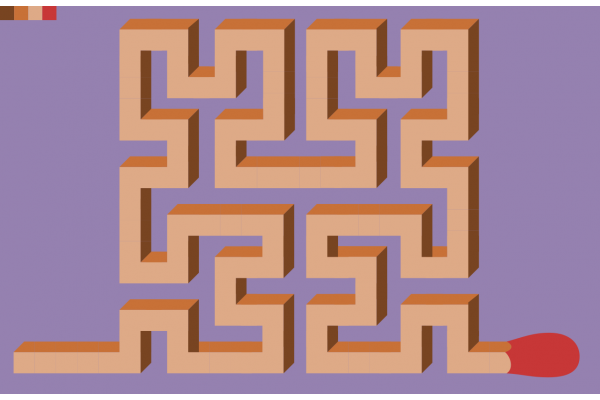 I had decided to work a bit on precision placement and precise shape crafting, once again inspired by Logos By Nick (this video for example) . Having settled on drawing a match in oblique projection, I decided to give it a more twisted look...

The curve that the match follows is an early iteration of the so called the Hilbert space-filling curve. It is a curve that wraps around itself and, when iterated tends towrds filling the whole unit square in a very squiggly, longer and longer path.

The procedure is to start with a simple "U" shape, and iteratively replace every turn with a more twisted version. As in day 6's drawing, it could be drawn using a L-system, namely:

I did not draw the Hilbert curve I used for this drawing, rather I took it from Wikipedia (this file). Importing a svg file from the web is even simpler than downloading it: just display the source code from the page, copy the file content and paste it in Inkscape!

The Hilbert curve is all about turns. It turns in all 4 cardinal directions. In order to draw a 3D shape that follows this path, I drew six basic shapes that I would just have to alternate in the right order:

I used the oblique projection to draw those elements, which means that I have a front side, an upper side and a right side. The upper and right side are slanted by an angle of 45°.

I based all those blocks on a square with appropriate dimensions, and duplicated this square, intersected, subtracted, added copies in order to build the blocks.

Note that I used very distinct colors: green for the front, blue for up and red for the side. And the blocks are semi-transparent, which really helps placing them.

In order to make a 45° angle, I had to rotate a square by the right amount. Here,pressing Ctrl while rotating clips the rotation to multiples of 15°, which is very handy.

Once the six basic blocks are drawn, it is a simple game of following the curve with the appropriate turns. I used again a helping trick to keep everything aligned: pressing Ctrl while dragging an object will guarantee that is it only shifted horizontally or vertically.

That way, if I want to be sure that two distant blocks are aligned, I place one block on top of the other, align them, and then pressing Ctrl I move the block to where I want, keeping the alignement throughout.

The svg file can be found here.